Is there anything better than a Smoked Baked Potato? You bet there is, a Smoked Twice Baked Potato! Take that BBQ or cookout to the next level, it might just be the best thing to happen to potatoes!

It might sound redundant, but the method is sound, the longer you smoke, the more it soaks up that great flavor! Just when you thought you couldn’t upgrade that Smoked Baked Potato, we bring you this, the Smoked Twice Baked Potato!

It’s almost like the best of both worlds collide in an explosion of flavor, both classic and smoked, a potato that elevates your table. Picture taken your favorite loaded Mashed Potatoes, then stuffing them back in the shell of your Smoked Baked Potato. Popping those back into the smoker topped with cheese….. you know you just pictured it!

The potato brings all kinds of options, so many things that you can do with it but why not elevate it to the final level. The perfect addition to your Smoked Corn on the Cobb, Smoked Baked Beans and Smoked Mac And Cheese. The Twice Smoked Baked Potato might just be the highlight of your side game!

How To Smoke A Baked Potato

Idaho Baking Potato – A nice medium potato should do the job.

Salt – Try using a coarse salt or sea salt to get you that nice crispy salty potato skin your looking for.

First, use the rough side of a dish sponge to clean the outside of the potatoes, removing any dirt from the surface. Next, using a fork, poke 3 rows of holes into the tops and bottoms of the potato.

Rub the entire potato with oil ensuring that you haven’t missed any spots. Take your course salt and cover each of the potatoes.

Insert a temperature probe into the largest potato, through the side, to monitor the internal temperature.

Prepare your smoker as needed and preheat it to the temperature of 250° (try to maintain between 250° and 275°, but not any higher). Use mild wood for smoking the potatoes unless you want something strong.

Place the oiled and salted potatoes onto the grill grate in the center of the smoker, close the lid, and smoke for about 3 hours. Cook time well vary depending on the size of the potato and the smoker itself. It’s best to track if your potatoes are done using the internal temperature. The desired internal temperature for smoked baked potatoes is 208° – 210° degrees.

Bacon – A nice thick center cut bacon. BBQ is about meat, you want the meat in any of your ingredients to shine through.

Shredded Cheese – While most any shredded cheese will do the trick, we suggest a nice mild cheddar or Monterey Jack, even a blend will do nicely.

Sour Cream – Your favorite sour cream will do here.

Butter – Make sure your butter is softened, we also suggest unsalted butter as it allows for more control over the sodium levels.

Milk – Whole milk is what you’re looking for here, but in a pinch you can always substitute heavy cream.

Salt & Pepper – What doesn’t get salt and pepper? Keep these handy and do it to taste.

Once your potatoes reached the desired internal temperature, pull the potatoes and set aside to cool while you prepare the other ingredients for your filling. Adjust your smoker to climb to between 375° and 400°.

Cooking bacon in the oven:

Bake your bacon at 400° for about 20 minutes or until it reaches your desired level of crispiness.

Be sure to separate some of the bacon to use as a topping.

Scoop the potato meat out of each potato half using a soup spoon, leaving about a quarter inch on the skin. Place the scooped potato meat into a bowl with the rest of the filling’s ingredients and mix until smooth and thoroughly mixed together.

Once you have finished mixing the filling, divide the filling among all of the potato halves evenly. Each potato half should be filled to the top with a little dome.

We’re not looking for style points here, but each potato should now have a nice helping of filling. Top each of the potatoes with the shredded cheese. Be generous with this and don’t worry about making a mess, this is BBQ, a mess is implied.

With your smoker now maintaining a temperature of 375° to 400°, place your prepared potatoes right into the center of the smoker. Allow the potatoes to cook for 15 – 20 minutes. Look for that nice golden brown on the exposed potato and for the cheese to be nicely melted and maybe even crisp in some areas.

Top those bad boys with some more bacon… hopefully you remembered to leave some aside, I did tell you too, and more fresh chives.

What wood should I use to smoke baked potatoes?

We recommend a milder wood like Oak, Pecan or Alder. If you desire a stronger smoke flavor you can use Hickory.

What oil should I use to smoke a baked potato?

How long does it take to smoke a baked potato?

While cook times will vary from one potato to another according to size, a good target time is around 3 hours. A better indication of a cooked potato is an internal temperature between 208° and 210°.

How long should I smoke the Smoked Twice Baked Potato the second time?

While we would suggest using conventional means of cooking the Twice Smoked Baked Potatoes, the microwave can certainly be used for reheating purposes. Because the potato is very thick, you may want to cut the potatoes in half before placing in the microwave for reheating.

Can an oven be used to finish off the Smoked Twice Baked Potato?

The oven can most definitely be used for the second round of cooking of the potatoes. This helps greatly especially if you plan on using the smoker for additional food items, particularly when they cook at a different temperature.

Will I lose the smoky flavor if I use an oven for the second round of cooking?

Because of the long process of the initial round of smoking the potatoes, they have already been infused with that wonderful smoky flavor. There is no need to worry about losing that if you find the need to finish them off in the oven.

Now it’s time to display your Twice Smoked Baked Potatoes! This is a lot of potato so for additional sides you might like to pair them with some Smoked Corn on the Cobb, Smoked Baked Beans and Grilled Zucchini. If you’re looking to add something sweet, you can try a delightfully fruity Grilled Pineapple and for a cold side always remember to add in some Coleslaw.

CLICK TO PIN THIS TWICE SMOKED BAKED POTATO FOR LATER 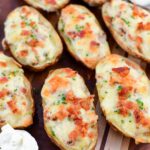 Is there anything better than a Smoke Baked Potato? You bet there is, a Smoked Twice Baked Potato! Take that BBQ or cookout to the next level, it might just be the best thing to happen to potatoes!
Print Recipe
CourseAppetizer, Main Course
CuisineAmerican
Keywordbaked potato, potatoes
Prep Time15 minutes
Cook Time3 hours 20 minutes
Total Time3 hours 35 minutes
Servings4
Calories697kcal

Welcome, everyone! I’m Lyuba Brooke, come in, grab a beer, and head to the backyard. Here, I love to grill, barbecue, and share everything I make. You will find a ton of recipes for grilling, smoking, and the sauces to dip it in.